In Virginia there are a number of species of ant to be on the look out for, but especially the 3 varieties we’re called about most often. The types are carpenter ants, red imported fire ants, and what is commonly referred to as “household ants”. Household ants are generally easy to spot inside of homes and businesses, while carpenter ants can infest the very wood of your building–spreading their colonies throughout. Fire ants, on the other hand, prefer direct sunlight and they primarily build their colonies in open areas. And out of all of the three ants discussed here, red imported fire ants are by far the most dangerous.

The Difference Between Ants and Termites

It can be difficult to spot the difference between ants and termites, but there are a number of striking differences: 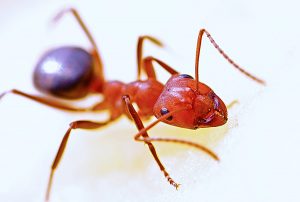 The red imported fire ant is native to South America and they were originally transported to the States in shipping containers that arrived in Mobile, Alabama between 1933 and 1945. Since then they’ve put down roots and have quickly spread through the southern United States. Red imported fire ants are one of the most invasive and are capable of creating massive underground colonies which can spiral through a large tract of land. The large size of the tunneling system makes it extremely difficult to eliminate a colony.

Fire ant bites are extremely painful and are capable of causing welts. Generally, fire ant bites can be treated with over the counter remedies, such as benedryl spray which will offset the itching and swelling. But it’s also possible that one of their bites could cause an allergic reaction, which may warrant medical care and could be fatal if left untreated. So anyone who is bitten and experiences dizziness, headaches, fever, difficulty breathing or chest pain, should seek medical attention immediately. 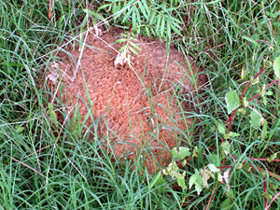 There are a number of fire ant treatments which you can purchase from local hardware stores. The majority of these will be in the form of powder based treatments that will instruct you to pour its contents onto the ant mounds before using water to saturate it–killing the ant population. The problem with this method is that it only tackles the problem on the surface level. Thanks to their underground network of tunnels, the ants are fully capable of escaping that mound and re-emerging at a different one a good distance away. EcoTek is experienced in completely destroying a red ant infestation and making your lawn a save play for your pets and children to play again. 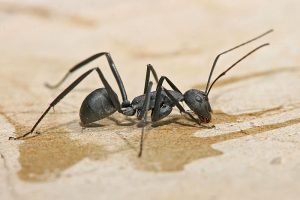 Carpenter ants differ from termites because they choose to build their colonies within weak, decayed areas of wood, as opposed to just eating it. These colonies can spring up within logs or trees on your property, or–within your home. But just because carpenter ants don’t eat wood that doesn’t mean they can’t do a large amount of damage to wooden structures. Just as it is with termites it is important to quickly identify a carpenter ant infestation and eliminate it before they’re able to do a large amount of damage.

How to Identify Carpenter Ants 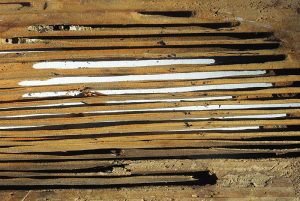 It can be difficult to spot the signs of a carpenter ant infestation before the damage becomes severe. But it’s important to be on the lookout for sawdust which would be a telltale sign of a carpenter ant tunnel, which has been carved through hollow areas of wood grain. And if you find these tunnels you will see that they flow with the grain of the wood which distinguishes them from termites.

Carpenter ants are like fire ants in the sense that both are capable of creating vast networks of underground tunnels. Carpenter ants will not stop underground through, because they’re also capable of building paths up through wood and right into the walls of your home or business. There are a number of methods to try and treat a carpenter ant infestation, the most popular store bought methods involve the use of dusts or liquids to try and kill the ants. EcoTek is a vastly superior option because not only will we completely eliminate the infestation but we will guarantee that they will not be back.

Do fire ant colonies/mounds look different from other ants?

Fire ant mounds may not have a hole in the center. The fire ant mounds can also be quite large and reach up to 18 inches in height. You may also be able to see tunnels away from the mounds. They also tend to build the mounds against objects.

How can I avoid getting ants?

Ants can be difficult to deal to prevent because they are small and hard to stop from entering your home. If you keep your home free of crumbs and only eat in your kitchen you can limit the chance of getting ants. You may also want to seal any small cracks you find and make sure your door frames and window frames close completely. Finally, be sure to repair leaking pipes since ants are always in search of a steady source of water.

How are carpenter ants different from household ants?

Carpenter ants are different from household ants because of their size. Carpenter ants are the biggest ant that we treat They are also pure black unlike the fire ants. Additionally, thorax is a rounder than other species of ants.

I’ve tried treating for ants on my own—they always come back. What should I do?

Products you buy from the store may temporarily stop ants from coming into your home, but they tend to return. If you want ants to go away permanently, you should contact the experts at EcoTek. We use a variety of methods to make sure that your ants will no longer to bother you.

Where are carpenter ants likely to set up a nest?

Carpenter ants will set up nests where other insects have been. They may be found inside of wall void, windows, door frames, near wood damp from a leak or in chimneys. Signs may include hollow sounding wood and seeing ants leaving after you knock near one of their nests.

See what our Customers are Saying!

Same or Next Day Service 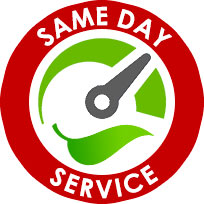 Call us before noon Monday to Friday, and we’ll treat your yard the same day! 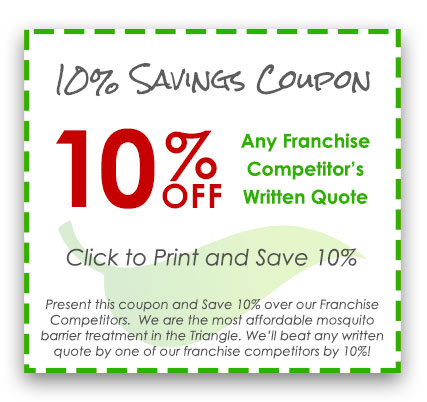 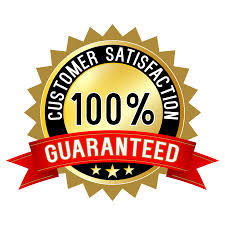 If you’re unsatisfied with the treatment in any way, we have a 100% money back guarantee. So there is no risk to you!