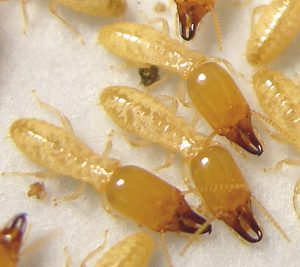 Termites are one of the most dreaded types of pests to find in your home–and with good reason. They are capable of doing tons of damage to a building without making their presence known until they’ve already decimated the surrounding structure. When you take a closer look at termites it’s easy to see why they’re one of the most successful types of insects on earth. They’re present on every landmass in the world, except for Antarctica, and they’re capable of establishing colonies filled with millions of individuals. Here at EcoTek, we spend most of our time getting rid of these pests but we also feel it’s important to know your enemy which is why we wanted to provide you with some facts about these insects. , as well as, a number of benefits their presence create.

The Upside to Termites

Despite their destructive diet termites, or rather because of them, termites manage to do a lot of good around the world. For one they’re important parts of the ecosystem and a number of species benefit from their presence. Their most important function is the fact that they break down and recycle plant based waste material. This clears the way and creates fertile ground for new things to grow.Termites have also been utilized as a valuable food source for humans and livestock. Since they’re plentiful, high in protein and pleasant in taste, they’ve long been staples of people living in developing countries. And the practice of eating them has been gaining popularity in developed countries as well. It has also been theorized that termites may be capable of playing an important role in space agriculture due to the fact that they’re able to convert waste material into edible biomass.

It can be informative to take a closer look at these insects and even examine their benefits. But it’s also important to realize that they are the very last thing you want in your home or business. In the United States alone, termites are responsible for roughly $1.5 billion in damage every year. And when you consider the fact they’re present everywhere except for Antarctica, then you can only begin to imagine the total amount of financial burden they’re responsible for every year.It’s true that termites have their benefits but inside your home they’re nothing more than a tremendous threat. That’s why EcoTek has developed highly successful ways of exterminating termites and ensuring that they never return.