Skip to content Skip to main menu
Home › ants › Are Fire Ants an Issue in Virginia? 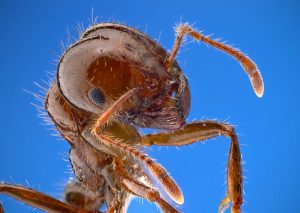 Fire ants are an invasive species of ant that are spreading throughout the United States. They do better in warmer climates, so they tend to be found in the southern parts of the United States more than the northern parts.  They can be found from California to Florida and are pushing a bit more north every year.

Fire ants have been reported around Roanoke and Richmond and in areas near Virginia Beach. They are growing more each year and may be an issue in your yard. Fire ant colonies can be quite extensive with large tunneling systems. They have been an issue in Virginia Beach and the Hampton Roads area. It is important to understand the threats that fire ants can pose.

The biggest danger of fire ants is there bite, which stings. When fire ants bite, it will leave a large welt. Often people are bitten by several fire ants at nearly the same time, and when they are disturbed, many fire ants will attack at once. Fire ant bites can cause a serious allergic reaction in some people. They will also attack and eat small animals.  People who have been bitten by a fire ant never forget how strong the sting is. It can take a while for the stinging to go away and then bite can be painful for a while.

Usually you will see the fire ant mounds before you see the ants themselves. The mounds can be quite large almost, a foot hide and about eighteen inches in diameter. They will start out smaller and look like sandy piles. Fire ant mounds do not have holes in the top of them. Fire ants are reddish brown and larger than most ants. If you see fire ants, you should steer clear. Be careful of stepping on the mounds. If find the mounds, you should keep your family members clear of the area until you can treat the area.

Fire ants can be difficult to treat because they will flee the mound you are treating through their extensive tunneling system. They will then build a new colony and mounds somewhere else in your yard. A professional can be sure to completely eliminate the fire ants for you. In order to eliminate the colony, you need to be sure to kill the queen and be sure that you treat all the possible mounds and tunnels that they have created.